Owing to economic growth, urbanization has become an unstoppable phenomenon and has led to a variety of complex issues, such as traffic congestion, air pollution, deforestation, coastal erosion, farmland decrease, climate change, and chaotic urban settlements with poor infrastructure. As Gujranwala is one of Pakistan’s largest industrialized regions, it has been growing rapidly over the past couple of decades. Stats suggest that most of the city growth has been uneven and unplanned due to the poor imposition of development guidelines. This has not only resulted in the aforementioned problems but considering that Gujranwala is a flood-prone area, unplanned city growth has also caused difficulties in times of disaster management. Thus, accurate prediction of BUA is vital for sustainable development, territorial planning and monitoring, crisis management, public health, and will help town planners in the mitigation of the previously-stated issues and flood hazard modeling of Gujranwala.

In this project, SVM classifiers are utilized for extracting BUA by using spectral and textural features. The generation of spectral features is done by the GLCM matrix which is used on each spectral channel of our satellite. For the generation of the most informative and useful features, selection techniques of Mutual Information (MI), Sequential Forward Selection (SFS), Sequential Forward Floating Selection (SFFS), are used. Our main objective was to extract BUA with higher accuracy. This project is based on refining and improving the classifier algorithm of SVM to improve the overall accuracy of the model. For the evaluation of our work, we compared our linear and non-linear SVM classifiers with BP-NN and k-NN classifiers. Alongside that, we have also compared the efficiency of our SVM classifiers with the classifiers used in previous BUA extraction studies. The results suggest that our proposed model accurately predicts BUA data and has greater efficiency than previous models.

Considering that it is challenging to use optical data for built-up area extraction because of the resulting spectral confusion as the built-up class gets mixed with other classes such as river sand, bare land, etc.), in this project, a more automated approach is used including a combination of spectral and textural features along with feature selection methods to avoid redundancy of information. Landsat-8 OLI data sets have been used with the help of SVM classifier algorithms coupled with spectral and textural features.

The opted methodology in this research for built-up region extraction by the utilization of Landsat-8 OLI imagery consists of 3 main steps: a) Extracting textural features from the available data and normalizing them along with spectral features. b) Finding features with maximum information MI, SFFS, and SFS techniques c) Using the optimal features, extracting BUA through classifiers including SVMs, BP-NN, and k-NN. d) Comparison of SVM classifiers with k-NN and BP-NN.

For the implementation and preparation of maps, Python libraries and ArcMap 10.5 are used respectively. The python libraries used include gdal/ogr (ver. 1.11.1), scikit-learn (ver. 0.20), matplotlib (ver. 1.4.3), tensor flow (ver. 1.11), etc. To ensure the visual verification of the BUA, the demarcation of the built-up area was done. Furthermore, as there were chances of misclassification of pixels, so pixel-wise statical measures like Kappa coefficient, overall accuracy, and some others were used. For faster convergence of classifiers, the spectral and textural data scales were normalized. Moreover, as the textural features provide spatial information from an image, they were used to cope with the issues posed by the spectral data. Also, to avoid the highly correlated data, feature selection methods were adopted.

The results depict that Linear-SVM coupled with SFS gives the lowest commission error of 2.54%, while the least omission error (5.57 %) is obtained by RBF-SVM in combination with both MI and SFS. Overall K-NN provides the worst accuracy. Regarding overall accuracy, the used algorithm managed to generate a high overall accuracy of 94.31% from the RBF-SVM classifier coupled with MI features which surpasses the accuracy of previously used approaches, which was 93.47% using RBF-SVM with MI features and 91.92% by using SVM classifiers.

The comparison results show that SFS selected more features and provided less accuracy. Whereas SFFS selected comparatively fewer features and generated a much more accurate outcome. Moreover, the addition of textural features increased the accuracy along with feature selection techniques, which not only reduced the redundant features but also reduced the capacity.

To summarize, our proposed combination of a textural-spectral approach coupled with the utilization of feature selection techniques can be applied to extract BUA more accurately as compared to the previous techniques.

Knowledge of the built-up area is significant for various applications, including proper urban planning and development, crisis management, public health, and can also establish a baseline for the embarkation of build-up areas in our study area, Gujranwala, which can be used for the flood hazard modeling since this area usually receives a high amount of rainfall in the monsoon season. It gets challenging to use optical data for built-up area extraction because of the resulting spectral confusion as the built-up class gets mixed with other classes such as river sand, bare land, etc.). In this project, a more automated approach is used including a combination of spectral and textural features along with feature selection methods to avoid redundancy of information. For this purpose, eight textural features based on the Grey-Level Co-Occurrence Matrix (GLCM) are selected and combined with multispectral data. By applying feature selection methods, features containing the most information are chosen. NN). After that, Support Vector Machine (SVM) classifiers are trained on selected samples by using the chosen optimal features. For the implementation and preparation of maps, Python libraries and ArcMap 10.5 are used respectively. The python libraries used include gdal/ogr (ver. 1.11.1), scikit-learn (ver. 0.20), matplotlib (ver. 1.4.3), tens or flow (ver. 1.11), etc. The results from SVM classifiers are then compared with k-Nearest Neighbour (k-NN) and Back Propagation-Neural Network (BP-NN). The comparison results show that this approach results in an increase in the overall accuracy of Linear-SVM by 8.41%, RBF-SVM 8.3%, BP-NN by 7.63%, and k-NN by 6.6%. Thus, it can be concluded that our predicted model surpasses the efficiency of the previously used models and can be used to accurately predict data comprising of build-up area of various regions which can eventually be used by the future town planners to cope with various urbanization related complex issues beforehand. 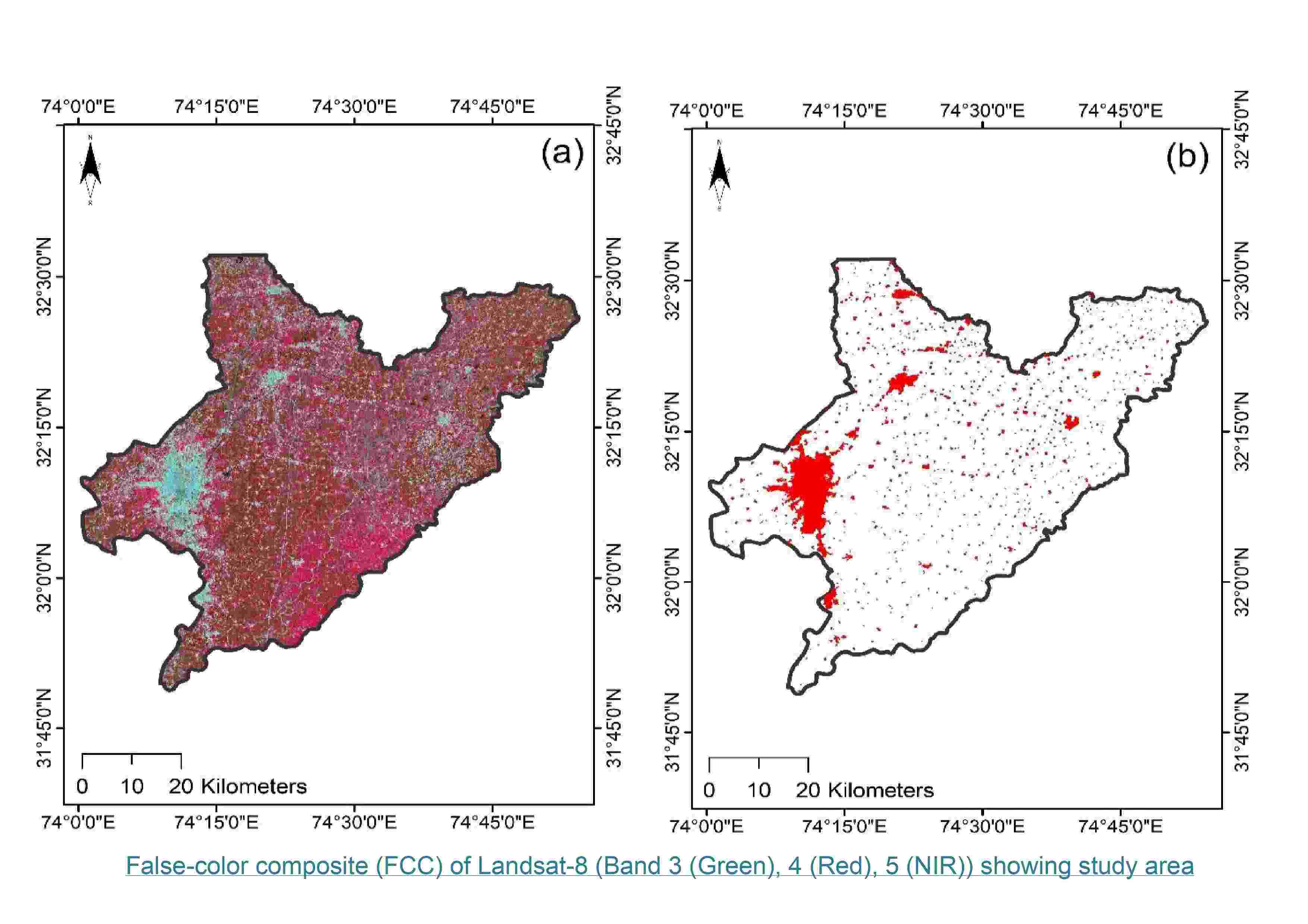 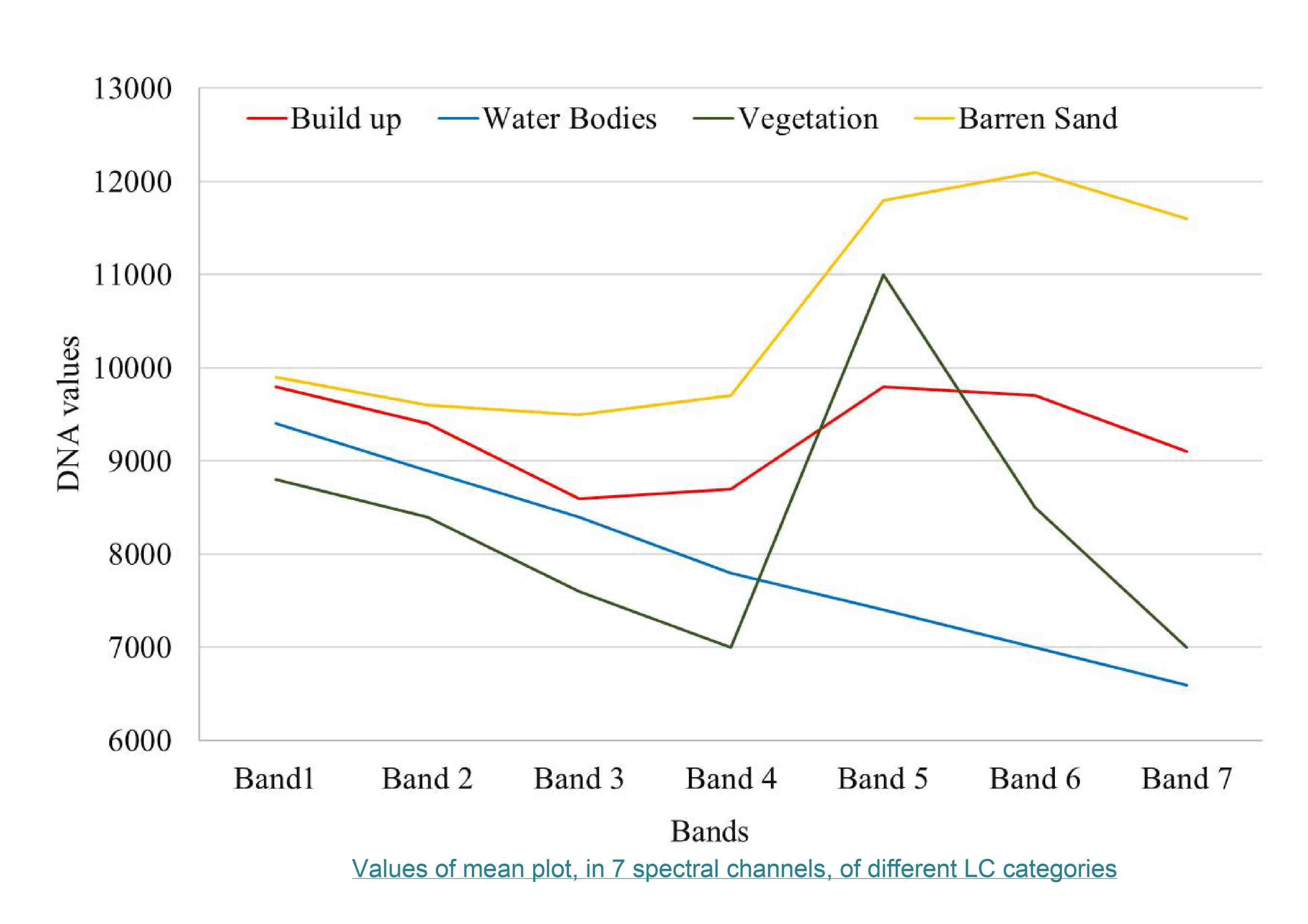 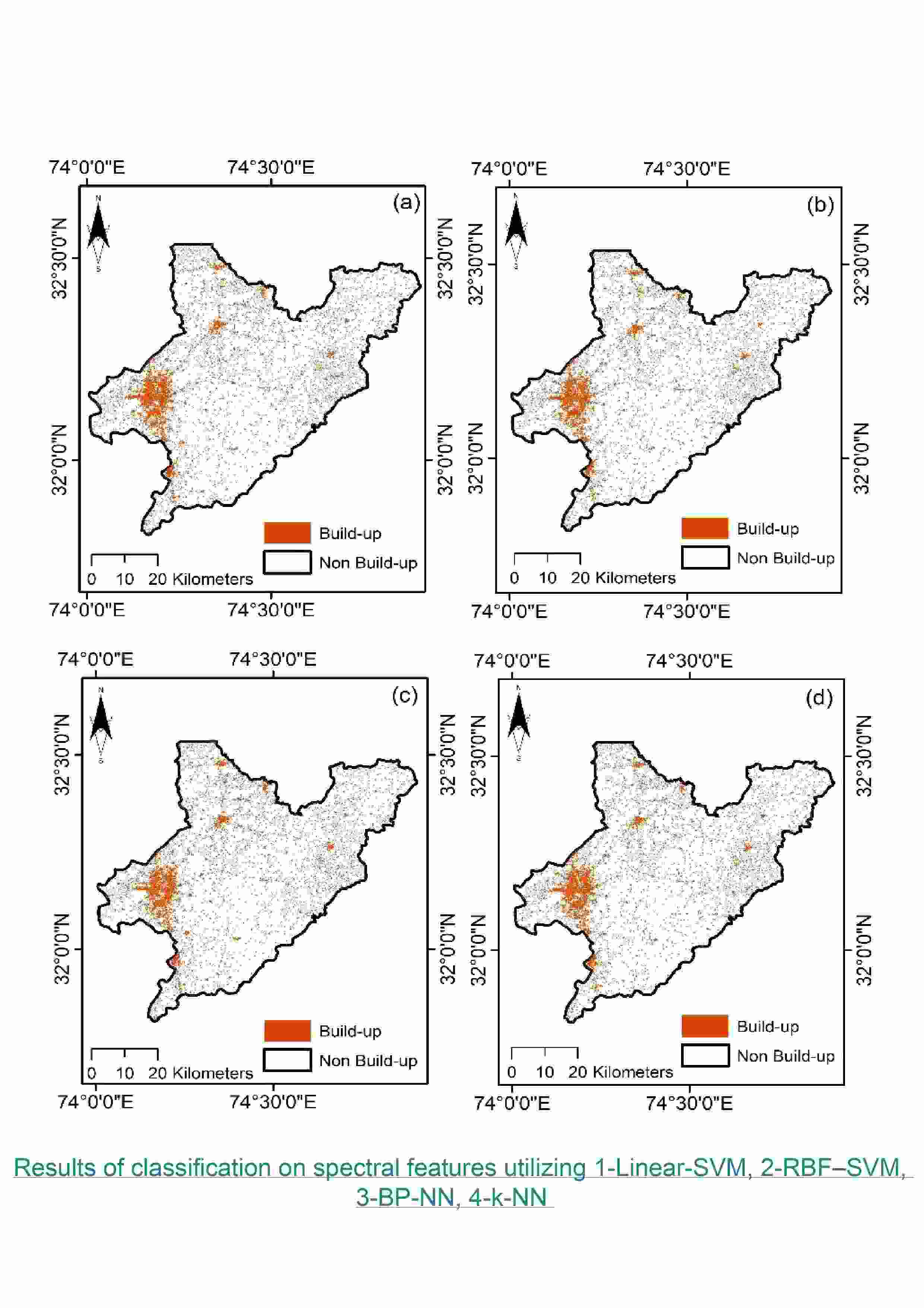 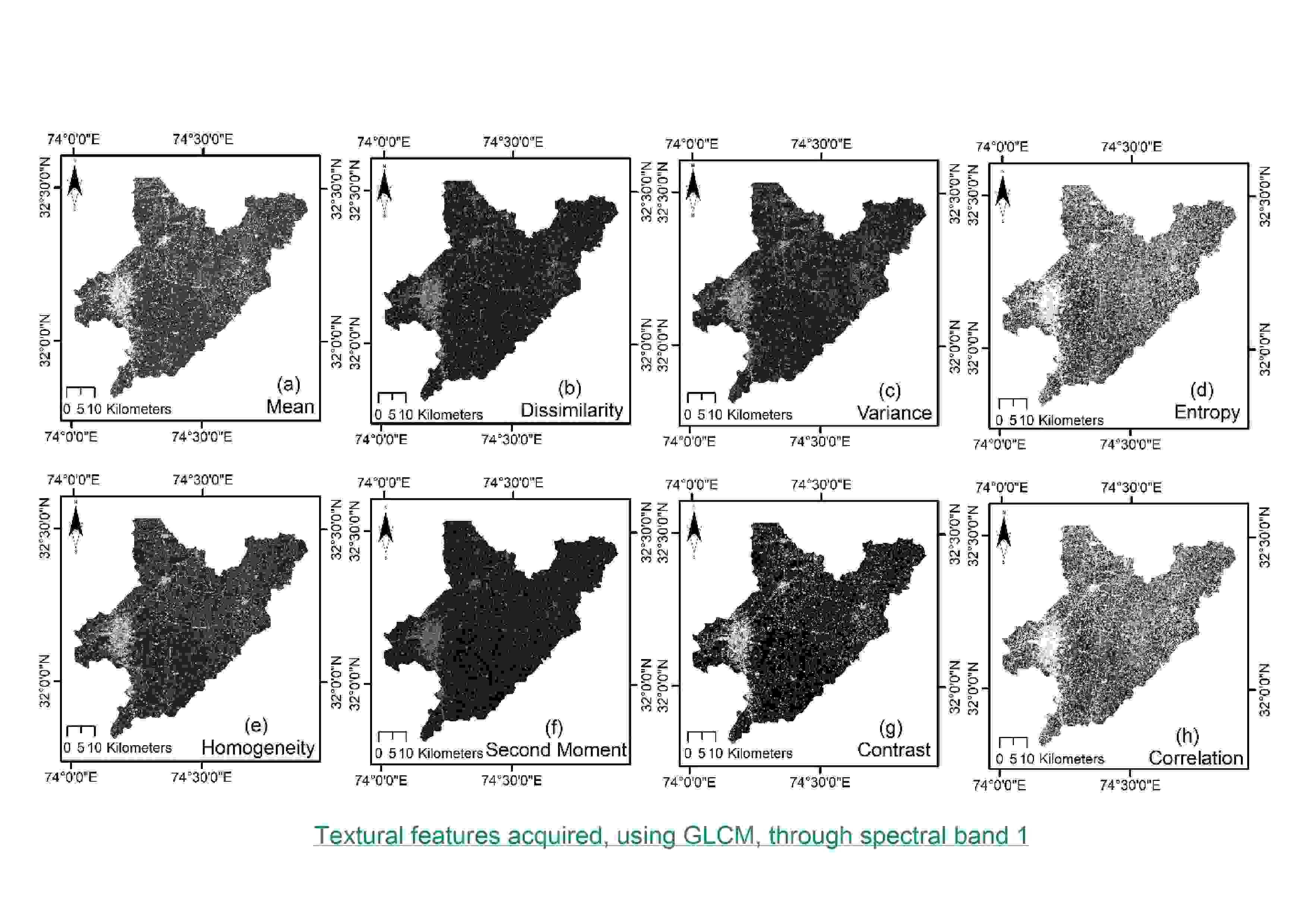 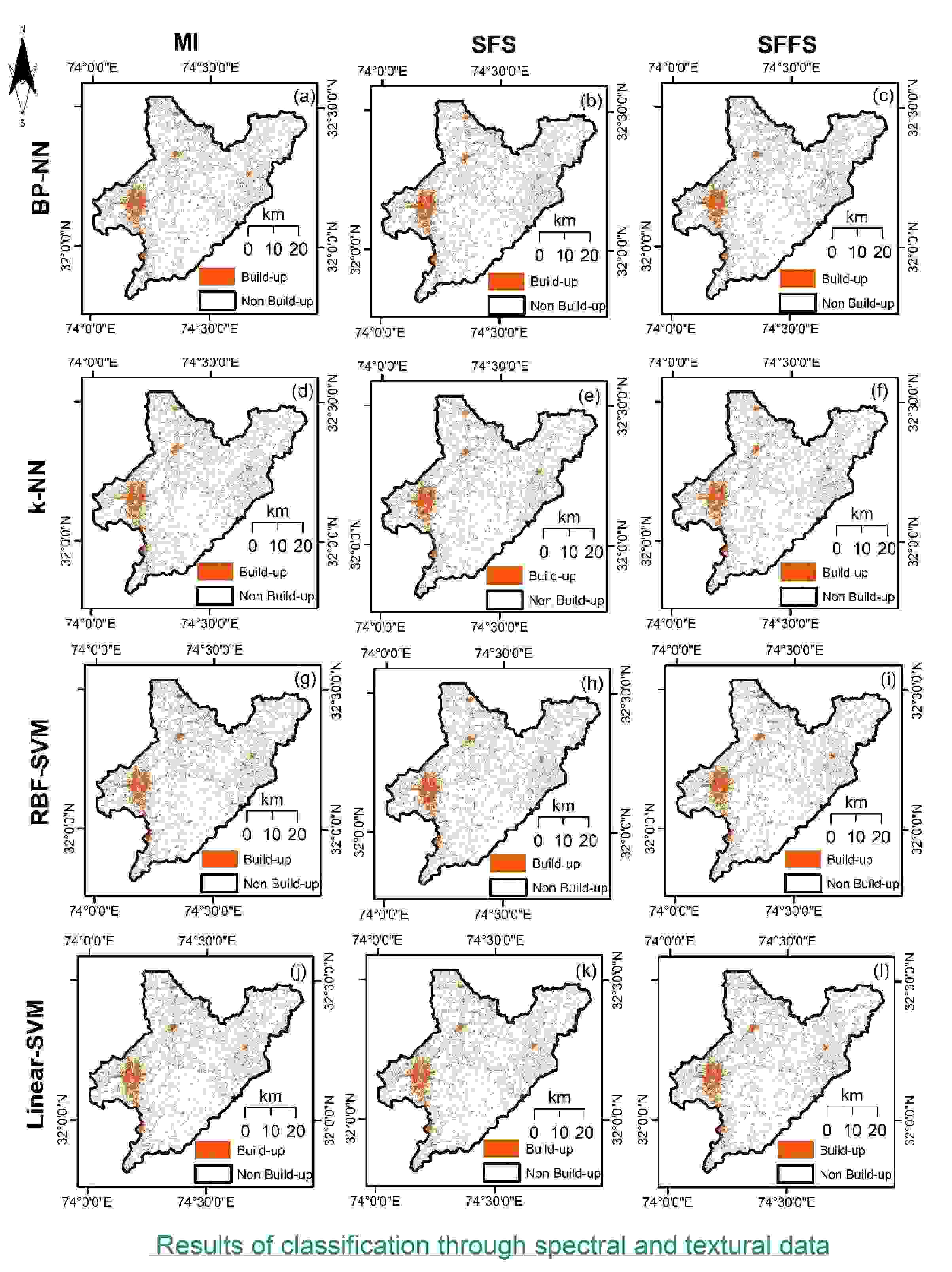